The waste engine oil, one kind means that the engine oil is mixed with impurities, such as moisture, dust, other miscellaneous oils, and metal powders, produced by the wear of mechanical parts during using, which causes the color more black and the viscosity bigger. And the second kind refers to the gradual deterioration of engine oil, generating organic acids, gums and asphalt-like substances.

Generally speaking, people think that waste engine oil is basically useless, but because of its greater harm, it cannot be dumped or thrown away directly, so it is necessary to find ways to deal with it correctly. The following editor of Doing Company will introduce the correct disposal method of waste engine oil for you according to different uses of waste engine oil.

1. Directly used on the metal hinges of some machinery to achieve lubricating effect. Although waste engine oil has been used for a long time, it can still provide lubrication for parts that do not require high lubrication. For example, the metal hinges of some machinery, such as the chains of our bicycles, the cab locks of some equipment such as excavators and loaders, can use waste engine oil to achieve the effects of lubrication, friction reduction, and rust prevention.

2. Waste engine oil can be used on the building template to prevent the template and cement from sticking together, and it can also play a role in preventing rust and corrosion.

3. Waste engine oil can be regenerated. In fact, the waste oil itself is not damaged much, but the additives in it have expired in the accumulated use, and contain impurities in the engine. The impurities and toxic substances in the waste engine oil are removed by sedimentation, distillation, acid washing, alkali washing, filtration, etc., and then after purification, new additives are added, which can become regenerated engine oil and return to the market. The United States has been relatively mature in this disposal method of waste engine oil because of high efficiency of recycling and use. 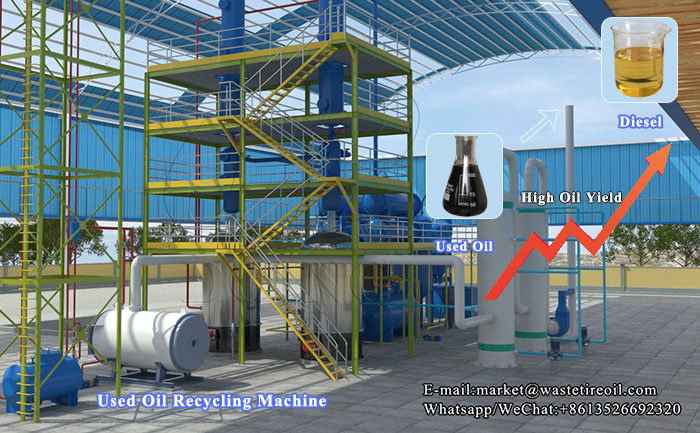 However, it should be noted that waste engine oil is classified as a solid hazardous waste marked by many countries. Therefore, it is strictly forbidden to buy and sell waste engine oil at will. You should find qualified waste oil treatment companies to dispose watse engine oil.

NEXT：How is dirty used oil recycled and turned into something useful?