Home > FAQ > Waste oil to diesel > What is application of fuel oil?

What is application of fuel oil?

Date:2014-12-10/ Waste oil to diesel/ Chat online Leave a message
Fuel oil is here means tyre oil,plastic oil processed by pyrolysis machine, some people call it crude oil or furnace oil,just different name,but same products.So, Where can we use about fuel oil? or what is the application of fuel oil? 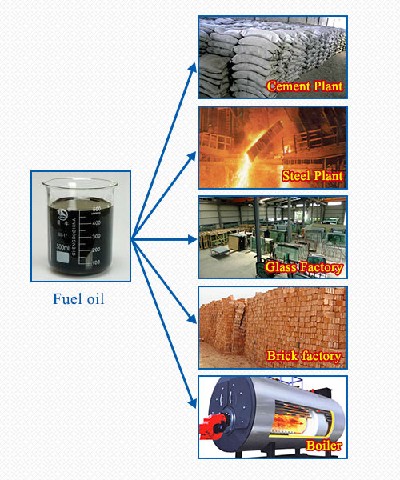 Fuel oil is a distillate home heating oil. Trucks and some cars use similar diesel fuel with a cetane number limit describing the ignition quality of the fuel. Both are typically obtained from the light gas oil cut. Gas oil refers to the process of distillation. Crude oil is heated, becomes a gas and then condenses.

Number 3 fuel oil was a distillate oil for burners requiring low-viscosity fuel. ASTM merged this grade into the number 2 specification, and the term has been rarely used since the mid 20th century.

Number 4 fuel oil is commercial heating oil for burner installations not equipped with preheaters. It may be obtained from the heavy gas oil cut.

Number 5 fuel oil is a residual-type industrial heating oil requiring preheating to 170 – 220 °F (77 – 104 °C) for proper atomization at the burners. This fuel is sometimes known as Bunker B. It may be obtained from the heavy gas oil cut, or it may be a blend of residual oil with enough number 2 oil to adjust viscosity until it can be pumped without preheating.

Number 6 fuel oil is a high-viscosity residual oil requiring preheating to 220 – 260 °F (104 – 127 °C). Residual means the material remaining after the more valuable cuts of crude oil have boiled off. The residue may contain various undesirable impurities including 2 percent water and one-half percent mineral soil. This fuel may be known as residual fuel oil (RFO), by the Navy specification of Bunker C, or by the Pacific Specification of PS-400

NEXT：What energy is used to heat the pyrolysis reactor?