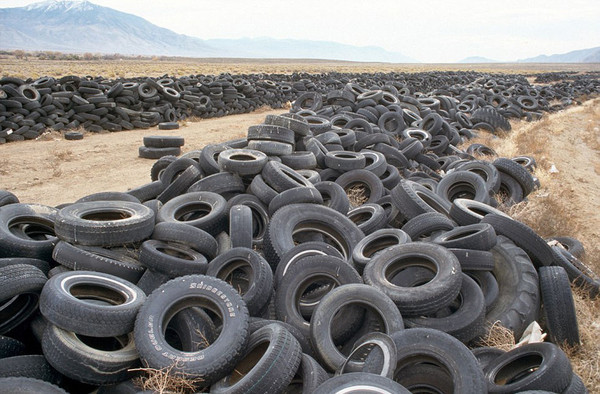 It’s like finding money on the street: the average tire contains the same energy as seven gallons of oil, and it has heat content up to 16%
higher than coal.  That’s one reason why tire recycling is starting to catch on in a big way.   It’s finally starting to put a dent in the notorious
tire dump in the U.S., many which are illegal.
Large scale tire recycling mainly consists of chipping or crumbing the tire so the rubber can be used in highway surfaces, or burned to
provide power for manufacturing.  Whole tires are also used in civil engineering projects.  But the future of tire recycling may belong to a
slew of companies that are coming up with new ways to recover more valuable resources from the mountains of “black gold”.
One reason why more companies are becoming more comfortable investing in tire recycling is the fact that used tires are a ubiquitous.
The introduction of inexpensive electric cars in the near future could also lead to an increase in rate of car ownership, and consequently
a greater volume of tires in the recycling stream.
Henan Doing Company can provide you the pyrolysis machine to process the black pollution. It is specializing in recycling tire crumb into a
high quality product that can be used to manufacture new tires.  PMGI/Productive Recycling is recycling scrap tire with concrete to form
blocks that can be used in wetlands reconstruction and other environmental projects.  Meanwhile, Henan Doing Company recently opened
a facility that will recycle tires into a “green” carbon black, which can be used in hoses, gaskets, roofing, and other materials.